My name is Sigud Virik (pictured to the right in the picture below) and this year I have had the great pleasure of attending the Can Do Basketball Referee Camp, which was hosted by legendary basketball referee Alan Richardson. As the Norwegian federation is becoming increasingly international, I have chosen to write this summary of the camp in English and I hope you will enjoy reading about my stay. 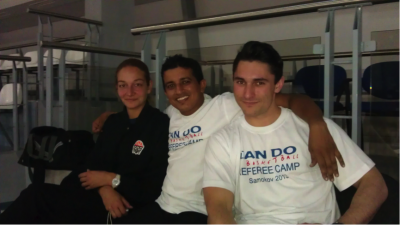 When Mr. Knut Myhre first asked me if I wanted to go to the camp, I was very excited. I had heard great things about this particular camp from several referees in Norway and I had also read about what Viola Gyorgyi, or “Vicky” as most people call her, had written after she attended the camp in 2012. Naturally I was very excited to attend the camp.

The camp was scheduled to last from the 9th of june until the 15th. I arrived by plane mid-day on the 9th and was greeted at the airport by a member of the Bulgarian federation and several other referees from all over the world. A few minutes into my trip I was surprised by the degree of different nationalities attending the camp. At the airport alone I meet people from nine different countries, including a FIBA referee from India. 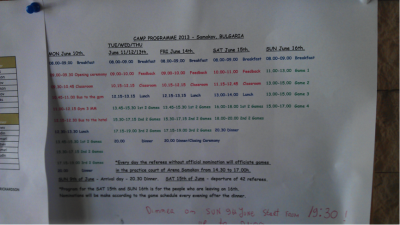 Our hotel was located in the 2nd largest skiing resort in Bulgaria, in the outskirts of the town of Samokov. There was about a ten-minute ride from the city center to the hotel. At the hotel we were booked in with a random partner. Since most countries sent more then one emissary, they usually got booked in together. I was very fortunate because I was teamed up with a very nice gentleman from the Danish federation. The funny thing is that he was not really Danish at all, he was from Spain, and he just lived there. But we had a common interest in making fun of the Danish love for “kartofler” which means potatoes in danish. It is a chance that only Norwegians will get that joke, so I apologize in advance to everybody else.

From Monday to Friday our days were fairly much the similar. Monday was a little more introductory then the rest but it basically consisted of lectures from 09:00 to about 12:00. The first part of the lectures were summaries from all of the different instructors of the previous days matches, ending with a few video clips of either «good» or «not so good» calls or positions.

If you have not attended the camp, believe me when I say that the lectures were great. We had some amazing instructors from all over the world yet we all had the same idea of how to become a great referee. That is not to say that there were not some cultural differences, for example when one of the instructors gave us an example of how he had avoided a major argument by kissing an elderly coach on the forehead and gave him a hug. As you might imagine this was very different from what I was told when I took the national level training in Norway, but we all got the point of the story, which was to respect the coaches and players, even though the Germans looked a bit puzzled. 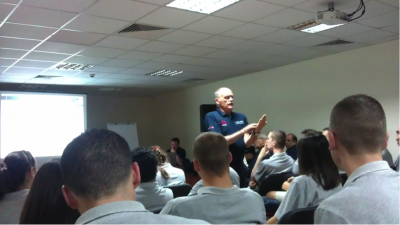 All the lectures concentrated on game management and how to make the step from being a good referee to being a great referee. The focus were on advanced refereeing mechanics as it was assumed that everybody knew the basics. And I think that was the «right call» as there were as much as ten FIBA referees participating including all the other high level participants, which says something about the quality of the referees attending the camp. Needless to say, the level of referees was very high.

After the lectures we ate lunch around 12:00, and then people were either assigned games in the official U16 National Bulgarian Championship or met in a smaller gym to practice mechanics. If assigned to an official game, we only got to referee two quarters of the game, as there were some many participants in the camp this year. To only officiate either the first or second half of a game was quite an adjustment, but it really gave me some great experience as we always had an instructor who watched only your half. After the game the 3 referees in the team sat down with the instructor and were given very detailed feedback of our performance. I was naturally pretty excited and was a little nervous for my first game. It did not help that in the first few minutes a Bulgarian player lost the ball in a fast break and ran into me trying to get it back. And that is why you should not always follow the advice to penetrate into the court. 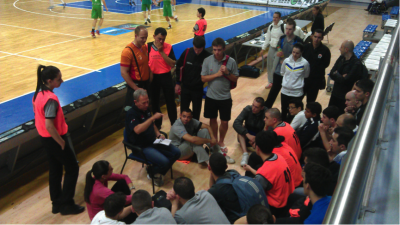 Because of the high number of participants on the camp, we were only officiating games every other day, but on the days where we did not have games, we could volunteer to referee young girls and boys to practice your mechanic. This was also a great way of really tuning our skills as we always had a FIBA referee to help us and give us feedback after the game. And even though it was fairly short games, they always had several things that you could improve. 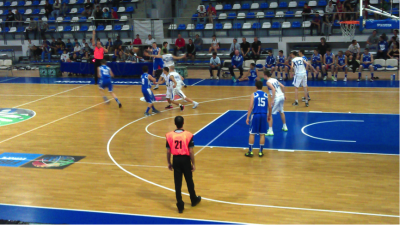 After everyone had either been officiating an official game or just a practice game, we were driven back to the hotel and served dinner. Dinner was served at 20:00, so after dinner we had some free time where we could mingle, rest or look at some clips from your own games which the instructors would show you if they had time.

The week consisted mostly of lectures in the morning and games in the evening. On Friday evening we were all given diplomas and the awards for most improved and best referee were also handed out. Then Mr. Richardson introduced the karaoke. And it was a great success. Every country, and almost everyone in the camp, participated either by singing local songs or by dancing wildly. It was a great way to end the camp and really created a strong and friendly bond between the referees.

Participating in the Can Do Referees Camp has made me a better referee. Not only have I gotten better technically and improved my mechanics, but I have also gained a much better understanding of what it means to be a referee. I had a great time in Bulgaria, I met tons of other fantastic referees and I have increased my knowledge of the game of basketball and how to make it even better by high level officiating.

I think the Can Do basketball Camp is a great opportunity for any referee and I can strongly recommend it for anybody how has the chance to go there. I am very grateful to Mr. Myhre and the NBBF Officiating Committee for allowing me to participate this year.