Here comes a little update from what has been happening here during the game days.

As we mentioned in the previous blog, games started on Friday. Players age group differed from 2001 to ’95-’96, both girls and boys. In other words, games all day starting from 08:00 am. Every referee had 3-4 games a day. Instructors observed us, and gave feedback during and after the game.

We would guess that, if a coach comes to thank the officials for the game at the end, and he is shaking hands to the refereecrew of the next game, means you did a good job on the court? 🙂

Feedback from instructors was mainly regarding to 3PO. Some had their first game in 3 person officiating, some had been doing it for years. We were discussing it with a lot of referees, and we concluded that referees in Norway are very lucky to have 3PO in 3 national league+ some NM tournaments.

«Practice is the best of all instructors.» Publilius Syrus

They made short clips during the games. Sometimes they showed it to us in the halftime break, pointing out 2 things to work on for the next two quarters. 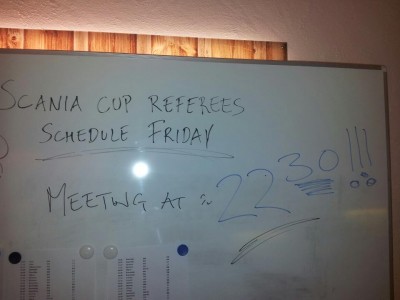 The referee group got an overall feedback, things to improve on, until the next day. Teaching clips with «superstars» weren’t missing either.

Tennaz had her birthday on Friday. Not that often happenes, that you get to celebrate your birthday with Costas Rigas + 140 referees together with more than 20 instructors singing «Happy birthday», right? 🙂 And yeah, the cake wasn’t missing either.

After this happening, we had a short meeting with the «Female Referee Clinic» intructors.

Saturday, beside the games, we had a presentation by Olegs Latisevs. «Practical advices for referees.»: Communication, psychology, signals, image(presentation as a referee), education, personality(how to build), preparation for the game(receiving the nomination), reparation for the game(on the game day) were the topics he was talking about. He gave us some ideas from his experience, how he prepared for the Olympic Games for example.

Saturday evening, meeting started from 22:30 too. After the general feedback and teaching clips with the «heroes», the women referees had their own meeting aswell. Instructors gave out some prizes for us referees: «Rookie of the tournament», «Most improved referee», etc.

Sunday and Monday were the days for the finals. We got to referee quarterfinals and semifinals. Exciting games. Specially, if the home team is playing and at one point, you have to stop the game because of the spectators entering the court to express their «opinion»…

We learned a lot, and for sure we return back to Norway as better referees!

I know we can’t compete with the Polish referees in number (43 participants this year..), but I honestly hope more Norwegian referees will join the tournament in 2014!

Tennaz and Vicky are (b)logging off now.. 🙂