Arrival to Stockholm and then to Södertälje was without any problem.

Once at the hotel we find out, that Richard Stokes will keep his «lecture» in Taljehallen about three-person officiating, and that we had half an hour to get there.

After dinner, followed by a lecture starting from 22:30, it was time for the nominations. My crew members were Maciej Bannach from Poland, also «crew-chief», and Diamantis Kokouvinos from Sweden.

First day of the games was Thursday. Some of the officials had three games this day, but my crew had two in a row in Brunnsang gym. We officiated Girls’98 games. Both of these games were even. First game BC NOKIA vs SBBK with a score of 33-26, second Sisu vs Huima 40-37. 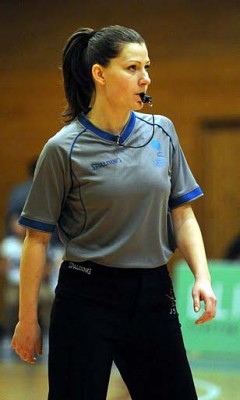 During these games we were observed by Alison Muir from England. She is also one of the leaders for the «women referee clinic» in this tournament. They will make sure that after this tournament everyone of us will get a DVD with one of our games, plus mentioning two things we did good during and one we should work on.

And finally! I wasn’t a rookie, Diamantis had his first game in three-person officiating, but I think he did a great job. We had a good crew, worked good as a team.

First game, second half we had a «concentration colapse», but then in the second game we could get it back. We had a good post-game feeling, and Alison congratulated us too for the team-work.

Thursday ended with a meeting with play situations and «heroes of the day». Forgot to mention that there are 24 commisioners here to observe the games, and that the cost of the triple whistle, technical foul and overtime is beer to every one of them.

But, so far so good!